The Taft Creek Bridge on Highway 37, 60 km north of Meziadin Junction, BC, was constructed as a single-lane bridge in 1984. Around 1988, an additional lane was added to make it a 4-span, simply supported, 2-lane steel girder bridge with a timber deck and a length of 68 m. The existing steel girders were showing signs of deterioration, and it was becoming essential to replace the timber with an impermeable concrete deck to protect the steel girders and piles to extend the service life of the bridge.
Pile driving records were incomplete, and based on a desktop study, the piles did not provide enough capacity to support a concrete deck. However, due to the observations of satisfactory bridge performance since construction, the design team proposed an in-situ pile testing program to demonstrate sufficient pile capacity to proceed with installing a new concrete deck. Sections were removed from selected existing piles, and a vertical load was applied to the lower pile portion, using the bridge as a counterweight. The measured pile capacities and resulting design load factors were sufficient to allow design and construction to proceed.

The final rehabilitation design upgraded the bridge into a continuous, semi-integral steel girder bridge with a composite concrete deck. Due to the site’s remote location, the precast deck panels were utilized, and specifications were developed for mixing concrete on-site for cast-in-place substructure components (abutments, pier diaphragms, pile concrete, and deck panel joints). One pier assembly was replaced with rock-socketed pipe piles due to potential scour susceptibility.
Single-lane traffic was maintained throughout construction without a detour.
The design focused on developing practical and effective renewal solutions to improve both the service life and seismic and climate change resilience of the structure, effectively resulting in an almost new structure that is expected to gain at least another 30 to 40 years of service. 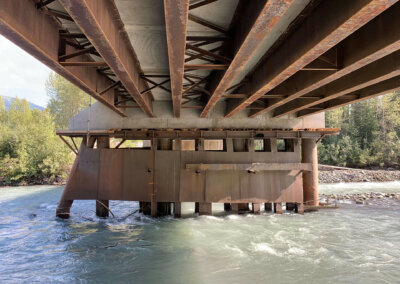 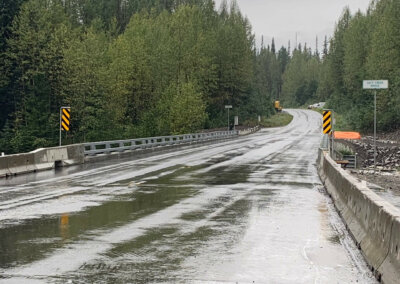 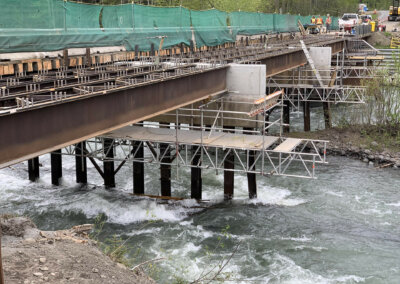 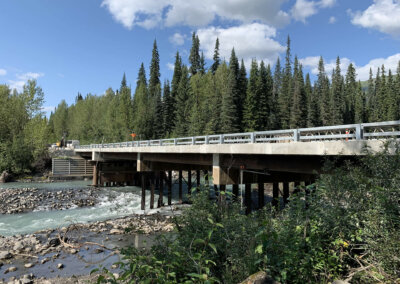