Owner: BC Ministry of Transportation and Infrastructure  |  Lillooet, BC

Slope stabilization was completed in Fall 2021 for Ten Mile Slide by the British Columbia Ministry of Transportation and Infrastructure on Highway 99 resulting in improved long-term safety and reliability for people and goods travelling the highway. Approximately 1,600 vehicles travel this section of highway every day; an essential route between the rural communities of Lillooet, Xaxli’p first nation and the Thompson-Cariboo. Landslide activity has been ongoing for decades at the site which spans the highway and railway above approximately 17 km northeast of Lillooet on the steep south slope of above the Fraser River. Prior to stabilization, single-lane traffic with 24-hour traffic control had been in effect for the last several years and the maintenance effort to keep the highway open was very high.

Ten Mile Slide is 200 m wide at the highway and 300 m long with an estimated volume of 1,000,000 m3 of soil material that forms part of a much larger, dormant “soil glacier” called the Tunnel Earthflow. The slide was first detected in 1988 and is a geotechnical anomaly being one of the only known continuously moving landslides in North America. From the project’s initiation the team recognized the uniqueness of this landslide in that it moves every day, and the resulting complexity of stabilization using structural components. Prior to stabilization, average movement rates of the slide were 10 mm/day with rates up to 50 mm/day following precipitation events. The movement of the slide has resulted in a shear zone near the base of the Tunnel Earthflow unit, which overlies undifferentiated glacial sediment comprising permeable, drained, dense, coarse granular soil with cobbles and boulders.

Typical solutions such as re-routing the highway, unloading the crest or buttressing the toe of the slide were not feasible due to the steep slope and proximity of the Fraser River at the toe of the slide and the railway at the crest. Subsurface drainage measures would be ineffective as the soils were already well-drained. Therefore, a structural solution which increased the shear strength along the failure plane was pursued. Four stabilization design options were shortlisted with the preferred option selected in Fall 2016.

The design solution needed to consider the steep terrain and ongoing slide deformation and ensure early installations could tolerate daily slide movement until enough support was installed to stop movement completely. The final solution included 276 soil anchor bars installed through 2.5 metre square concrete blocks above the highway, a tied-back pile wall (148 large diameter drilled shaft piles with 125 tie-back anchors) below the highway and reconstruction of the highway alignment, grade and surface drainage. Works were installed by top-down construction within defined time allowances in the contract. Significant work was undertaken beyond standard design processes for this complex project, such as comprehensive geotechnical investigations, aerial and terrestrial laser scanning and change detection analyses, pre-production test anchors, detailed geo-structural numerical modelling and due diligence activities to validate and optimize the design.

Monitoring data indicates the completed stabilization works were very successful and Highway 99 is back into full two-lane service. The project resulted in a safe, reliable highway alignment that is the most direct connection between Lillooet and Kamloops, is essential to maintain community connectivity for Xaxli’p, provides community benefits and economic reliability, and minimizes maintenance costs for this important corridor to provincial and national transportation routes. 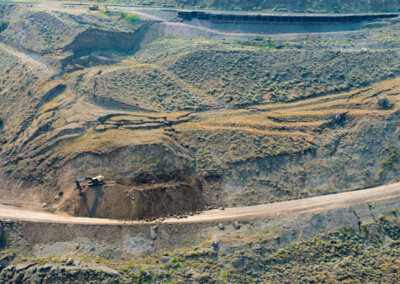 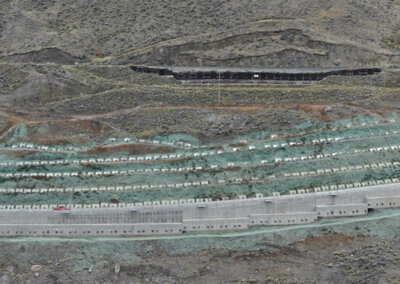 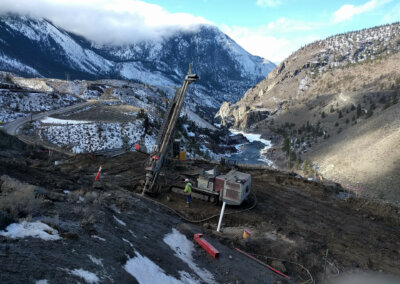 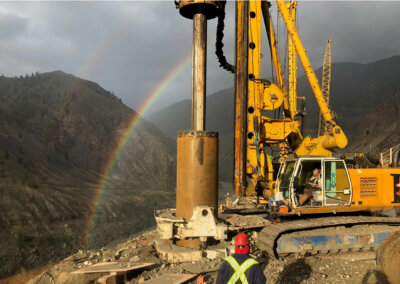