LNG Canada, through Bridgemans Service Group, engaged Westmar Advisors to assist in relocating an existing operational barge terminal in northern British Columbia to a new, exposed site. The new site presented challenging conditions and the project had to be completed in only ten weeks. In addition, the barge terminal could only be unavailable for service for a few days. Normal timelines for a project of this nature are much longer than ten weeks and involve a significant environmental and navigational permitting component together with the time needed to design and construct the new marine structures and then decommission the old structures.

It was clear that an innovative approach was needed to meet the project’s requirements. Westmar’s solution utilized components traditionally found in the offshore marine industry, such as large drag anchors and high-capacity mooring chain dampers, instead of piles or other common inshore support structures. The use of the offshore components reduced potential environmental impacts, enabling a fast permitting process and removal of stakeholder evaluation requirements. The use of offshore components also reduced the procurement lead time as well as the time required for construction. The terminal design utilized a large barge that was retrofitted into a floating breakwater and mooring lead. Modular floats were used to support the existing loading ramp that was part of the original terminal. The challenging wave conditions at the new site were overcome by utilizing offshore technology in the form of high-capacity mooring chain dampers. Advanced modeling was used to validate the concept design and component loads.

Removal and modification of components from the original terminal and construction of the new terminal were completed in just seven days. The new terminal, which was originally planned to operate for only eighteen months, is now planned to be removed and relocated for use at a different site in the future.

The original terminal used a steel barge ramp supported by floating pontoons at the barge berth. Piled supports were used to hold barges in place when docked to the barge ramp. The intent was to remove the barge ramp and re-use it at the new terminal. A comprehensive site-selection process identified only one feasible site for the new terminal. The new site lacked enough water depth for barges to operate across the full tidal range if the original barge ramp was used in its existing configuration.

To enable barge operation at all tide ranges, a concept design was developed that positioned the berth face into deeper water. The original pontoon supports were replaced with a large floating platform of interlocking modular floats. The floating platform would also be the berth face for the supply barges using the facility. A new cast-in-place concrete abutment was designed to be added to an existing lock block bulkhead at the shoreline end of the barge ramp.

The floating platform and supply barges using the facility would be protected from waves by a floating breakwater. A large barge was modified into a floating breakwater and held in place with mooring chains fitted with attenuators and drag anchors. Spectral wave computer modeling was combined with dynamic mooring analysis to determine acceptable chain, anchor, and connection hardware loads. This design avoided permitting and consultation delays and enabled rapid sequencing of construction activities.

By utilizing an innovative combination of offshore mooring technologies with readily available inshore marine equipment and structural components, a temporary barge terminal was designed, permitted, and constructed in only ten weeks. The reduced environmental impacts of this unique solution allowed for streamlined and rapid environmental permitting, construction, and decommissioning. The design also enables low-impact removal and cost-effective relocation of the entire facility. 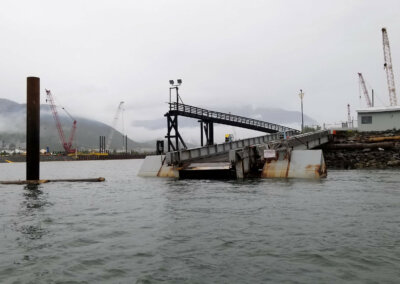 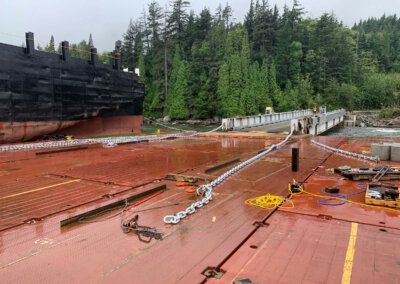 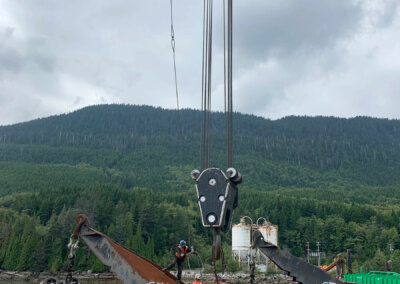 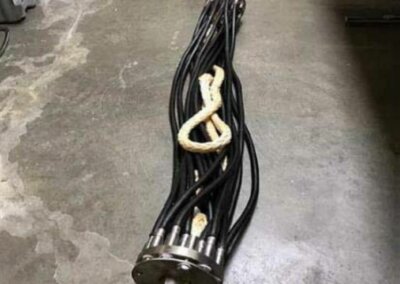