The construction of the Site C Dam involved building a cofferdam across the Peace River and diverting the river through two tunnels. Upstream of the diversion tunnels, a floating debris boom was placed to trap debris and reduce the risk for potential tunnel obstruction. Blockage, or even partial blockage of the tunnels, combined with a high inflow event could result in overtopping of the cofferdam and significant project losses.

The debris boom, designed by Northwest Hydraulic Consultants Ltd. and its subconsultants Gygax Engineering Associates Ltd. and GeoNorth Engineering Ltd., is unique in its requirement for performance in a high velocity environment. Typically, a debris boom is placed in a reservoir where water velocities are very low (0.1m/s – 0.5m/s). The Site C temporary debris boom was designed to trap and retain floating debris in water velocities of over 2.0 m/s, far beyond typical debris boom operating conditions.

The debris boom was also required to handle an exceptionally large volume of debris. The post-diversion site conditions are such that, in a large flow event, the tunnels could cause a backwater raising upstream water levels in the order of 20m and extending several kilometers upstream. A design debris volume for the boom in excess of 100,000 m³ was adopted to include potential riverbank release of woody debris by this backwater, as well as any debris being carried from contributing watersheds.

The design considerations resulted in many challenges. Firstly, a boom design capable of effectively retaining debris under high velocity was needed. Additionally, since the design loads were high due to velocities and debris volume, structural components such as the primary tension element and anchor lines were at the limits of constructability and material handling constraints. The design of the boom had to also include anchor construction in dry conditions on the riverbanks since mid-river anchoring was not feasible.

The design of a debris boom placed a high velocity location was a distinct challenge. The concept had to be proven by a physical hydraulic model test, and then loads were calculated for structural and geotechnical design of the boom and anchors. A 1:10 scale model of the boom concept was tested in water velocities that scaled up to 2.1 m/s in the real world. Taking learnings from the model testing, which included observational outcomes such as the debris mat behavior, characteristics and failure mechanisms, and tension force measurements in the model boom under debris loading, the design was developed.

Since the velocities were highly variable both spatially across the river profile and temporally depending on the river flow and debris volume, a traditional approach to debris boom design was not feasible. The design team used surface water velocities generated by a CFD model of the river reach and estimated debris distribution to generate a loading profile that varied along the span of the boom. The distributed loads were then structurally modelled to calculate a deflected shape of the debris boom that fed back into an iterative process of re-calculating distributed loads.

Due to the variability of the deflected shape of the debris boom, the deadman anchors had to be designed to accommodate a large swing in the load direction. Additionally, special considerations had to be made to enable transportation of the boom components, such as the three massive can buoys. 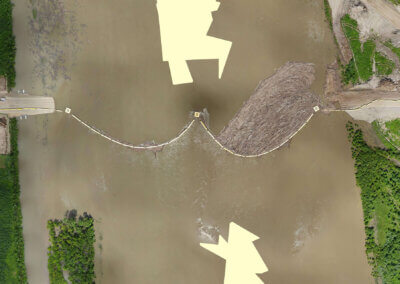 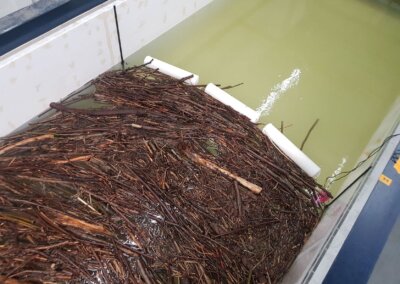 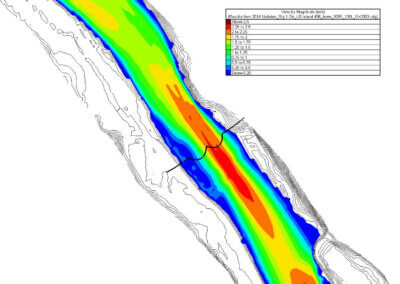 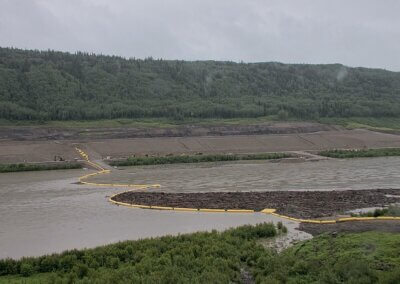